On Monday, January 21st most of the Noble Team found themselves shoveling out of the snowstorm that rampaged through the Midwest and Northeast of America. Weather forecasters predicted 8 to 10 inches of snowfall in the Capital Region over the weekend. However, a lucky pair found themselves in beautiful Palm Springs, California. There was no snow in sight for our Sales Representative, Christian Card, and Laboratory & Quality Manager, Matt Reasor! What brought them to California? Well, Purity Plus hosted their second annual Gas Day Conference in the warmer climate of Southern California. We would have to agree that the West Coast is a much safer bet for an event in January. 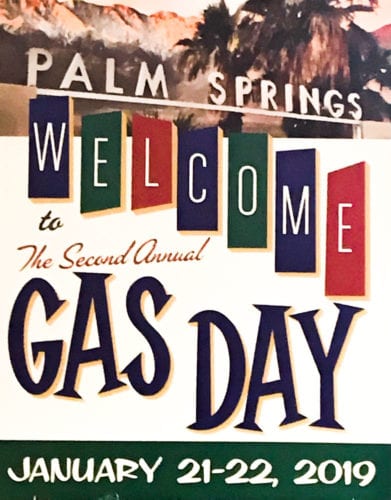 Matt and Christian, soaked in a lot of new industry trends during their short stay in California. Purity Plus was created within the IWDC organization, so many of their members hosted this yearâ€™s presentations. Vendors used this platform to promote safety, products, and services within the Gas and Welding industry. Among the speakers were Computers Unlimited, Weldcoa, and Concoa. Noble Gas Solutionsâ€™ automatic fill island was featured during Weldcoaâ€™s presentation, being the first owned by an independent distributor on the East Coast. An accomplishment of special importance to the IWDC, as it is made up of independent welding distributors.

Another major accomplishment for the IWDC was announced during the Gas Day Conference. Four IWDC members have partnered with one non-member to create their own Air Separation Plant in Minneapolis. This will be the first Air Separation Plant created by independently owned distributors in the United States. This is a big advancement for Independent distributors no longer wanting to solely rely on the major suppliers, like Linde or AirLiquide.

Our last industry update is regarding cryogenic storage. The sudden and unannounced departure of Chart Industries has left distributors looking for alternatives. Chart was a major distributor of cryogenic dewars and bulk tanks for many of the IWDC members. In their absence, IWDC is seeking another company to come on board and enjoy the benefits of the co-ops partnership.

Fun in the Sun!

The attendees of this yearâ€™s Purity Plus Gas Day conference took time to enjoy the weather with outdoor activities and charity events. It was never a dull moment in Palm Springs! Purity Plus organized some fun competition with the IWDC members. Tuesdayâ€™s â€œBuild-A-Bikeâ€ charity event saw members competing in various team building games, while also assembling bikes for kids! Once assembled these bikes were donated to the local Boys and Girls Club of the area.

One of the biggest highlights of their trip, however, came from an interesting uber ride to their hotel. Their uber driver, Neal Murray, claimed to be the mixologist who invented the original Cosmopolitan drink. It just goes to show, you never know what celebrity you may run into when in California.